“A Few Drops Can Change Your Life!”

There is no other Iodine on the market that we have ever used that has an amazing rapid dispersion that this Electrically-Charged iodine has. When you put a drop into water it disperses so fast it looks as though it vanishes. That is why it is so bio-available in the body. Try it and see what I mean. 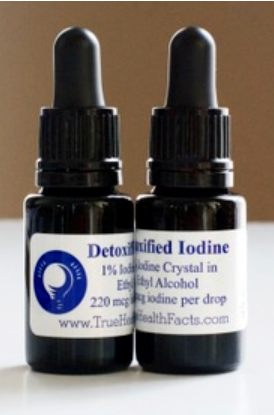 DETOXIFIED IODINE daily in water or topically on the skin. TrueHealthFacts.com is your source for detoxified iodine. Now available in the easy to use dropper bottle. This is the same electrically charged iodine which has set the standard in the industry in a one ounce bottle with synthetic dropper for ease of use and long term durability. Our iodine is reduced to a 1% concentration in 100% ethyl alcohol and electro-magnetically transmuted (while being suspended in a wet bath containing a mild acid solution) into the Atomic state. From there it is bottled in 1/2 oz. or 1 oz. (amber) dropper bottles and unless otherwise indicated, labeled and sealed with a full bottle heat shrink.

The supplementation of iodine, as essential component of the thyroid, has been reported to give relief from:

USAGE/DIRECTIONS: Detoxified Iodine 1/2 oz: 4-6 week supply Detoxified Iodine 1 oz: 8-12 week supply Take 1 drop in 3 to 6 oz water or topically for the first day, increasing 1 drop each day for 5 days. Give yourself 2 days off and then repeat for five days. Follow this routine for three weeks. Then you can take 5 drops daily and work your way up slowly as long as there is no discomfort. Most people stabilize at 8 to 10 drops daily; some may need up to 12 to 15 drops. Once you have raised your levels, it may be okay to cut back a bit and it’s okay to skip a day once in a while.

RECOMMENDED: 8 am to 12 noon on an empty stomach 30 minutes before or 1 hour after meals, medications and/or supplements. Taking it after 4 PM could raise your energy levels and leave you not being able to sleep at night.

Review of why to supplement with Iodine 1. Iodine Is an Essential Element

2. Iodized Salt Is Not a Good Source of Iodine

4. Iodine Deficiency and Breast Cancer Have Been Linked

5. Iodine Allergies’ Are Not Caused by Iodine

7. Iodine Protects the Thyroid from Radiation

13. Rejuvenates Skin From the Inside Out!

14. Detoxified Iodine is the Ideal Supplement

2. Nutritionally Supports the Thyroid. Each drop of Detoxified Iodine contains 220 micrograms of iodine to promote the normal iodine levels necessary to support the thyroid and encourage normal hormone balance.

3. Promotes Detoxification. Fluoride, chlorine, and bromine compete with iodine for the same thyroid receptors. Having enough iodine available helps defend and detoxify the thyroid against these toxic halogens.

4. Unmatched Quality Unlike other iodine supplements Detoxified Iodine is an extremely pure and concentrated nascent iodine that is free of additives and toxins.

5. Potent But Gentle Formula Review of why to supplement with Iodine

1. Iodine Is an Essential Element

2. Iodized Salt Is Not a Good Source of Iodine

4. Iodine Deficiency and Breast Cancer Have Been Linked

5. Iodine Allergies’ Are Not Caused by Iodine

7. Iodine Protects the Thyroid from Radiation

13. Rejuvenates Skin From the Inside Out!

14. Detoxified Iodine is the Ideal Supplement

It’s only been a couple hundred years since iodine was first isolated as an element. During the first hundred years no really had any idea what to do with it. Eventually the French and the Swiss started using it as a way to counteract mold and bacteria. However, it wasn’t until Edgar Cayce started speaking at length about it during the 1920’s and 30’s and prescribing it in an electrically charged or “atomic” state that people began to understand how it could be taken internally to stabilize the thyroids and thereby assist with balancing overall body chemistry. Taking their lead from Mr. Cayce, the government began iodizing salt during the great depression, and after WWII it was widely used as a preservative in milk and bread in the U.S. This in turn ushered in a new era of peace and prosperity though the strength and health of the general population. Other industrialized countries around the world followed our lead which inadvertently resulted in a furthering of the disparity between the wealthy countries and those less fortunate. Today, this is commonly misinterpreted as a fracturing along the lines of religious and belief systems.

As iodine only bonds with living things in the ocean, we can begin to see why it is that most people want to live near the coast line. Tens of millions of land-locked Americans lay claim to the “Salt Life” by posting it in the rear windows of their vehicles. In truth, it’s not the salt so much they crave, but rather the iodine which courses through the sub limitable veins of the masses, who pilgrimage ritualistically to the waters edge. This is their time to relax and restore and in effect return symbolically to their “hot soups” origins where we were taught as children that the creative forces began life itself. Indeed, if Mr. Cayce’s edict that there are only four elements necessary to sustain life (water, salt, soda & iodine), then this schoolyard notion about the origins of life does hold water, so to speak, and we do return to our heritage each time we partake of those rejuvenating elements which embody this philosophy. Let the baptism begin then with the emersion in to the knowledge that each of us can have the healthy life we came here for, and give a thankful prayer for the peace on earth which elevates the soul into a natural and spiritual awakening!

First thing in the morning put 6-8 drops in a half ounce of water for a rinse and gargle for 10 to 15 seconds and spit out. This kills a lot of bacteria in the mouth and below the gum line. In turn this sends a positive signal to the rest of the body as the teeth are the Grand Central Station of the body’s meridian system.

Begin say on a Monday morning with a single drop in water. Increase one drop each morning, so by Friday you are up to five drops. Leave it off for the weekend and repeat this sequence until you feel ready to develop your own sequence. By gently priming the system in this manner you will enhance your intuitive powers and restore your free will!

By following the “in water” sequence topically, the uptake is slowed down, and you are afforded the added benefit the skin test offers by watching to see how long the color stays on the skin. The quicker it disappears, the more the body is calling for it.