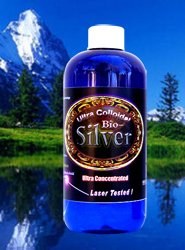 Silver Mountain Minerals product technology for the Colloidal Silver enables the desired ratio of production of silver ion to silver colloidal to be determined in advance. This enables two seperate products with diverging Ionic to colloidal ratios for the use and applicibility to various body conditions both internally and topically. For topical applications in general the addition of extra Silver Ions has some increased benefits in many cases where taken internally studies seem to indicate that silver particulate colloids servive their useful intent better and the additional Silver Ions may be less useful. A further study of this issue can be seen in the site subject heading of Colloidal VS Ionic.

When the body is healthy, it maintains a proper pH and oxygen-rich environment. Studies are showing that disease, particularly cancer thrives in oxygen deprive pH acidic tissues. Infectious microbes produce The pH body terrain acidic condition they like to live in. Colloidal Silver’s limiting factor upon infectious microbes has the net effect of helping the body maintain proper pH. The pH (parts Hydrogen) inside the cells of the body are usually near an alkaline pH 7.2-7.4. Outside the cell, the fluid surrounding the cells will usually realize an acidic pH near 4.0.

However,when an individual does not maintain a healthy environment in the body, the pH begins to rise in the outer fluid and fall inside the cell. This reduces the electrical potential of the cell. The oxygen levels in the body respond by decreasing. Anaerobic Pathogens that grow in the oxygen deficient tissues will usually attack these weakened cells and “Enjoy the benefits” of their new more comfortable body terrain. Organisms that cause illness and attack these weak cells cannot survive in healthy cells that have outer fluid pH below ~4.0 and inner cellular fluid above pH ~6.9. Silver maintains a positive charge which when introduced to areas of infection, disrupt the organisms causing the illness.

Colloidal Silver also kills pathogens directly by inhibiting the enzyme(s) that these pathogens utilize to survive in their anaerobic environment. This enzyme (s) is the pathogen’s “chemical lung”. Without the necessary enzyme(s) for metabolism, growth, regeneration and survival, the pathogens “suffocate” and die. It is believed that viruses are destroyed because the electric valence charge of silver particles cause their protective protein coat, also referred to as the “head”, to collapse and are rendered unable to replicate. The cells infected by virus will also be susceptible to enzymatic inhibition. They are then removed from the body by the immune, lymphatic, and intestinal elimination systems. This process is so effective that no pathogen has been recorded to mutate Colloidal Silver is one of the oldest remedies in the World and can be traced as far back as the ancient Greek and Roman Empires.

It is non-toxic, non-addictive and free of side effects; Colloidal Silver is thought to kill an average of 650 different organisms – compared to the 6 of a standard antibiotic! It is safe for adults, children, animals and pregnant and nursing women. It can be applied topically and internally and has no reaction with other medications.