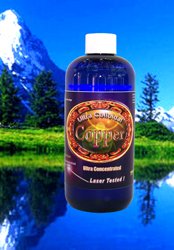 This product is known to:

4. Helps maintain the integrity of connective tissue in the heart and blood vessels.

5. Plays a role in bone formation.

6. Plays a role in the metabolism of the neurotransmitters norepinephrine, epinephrine, and dopamine.

7. Functions as an antioxidant.

8. known to play an important role in the development and maintenance of immune system function.

10. Used as a remedy for grey hair, burns, arthritis, parasites, and viral and bacterial infections.

12. Alleviates anaemia and molybdenum deficiency and has also been used in the treatment of arthritis, bursitis, and rheumatism, and to stimulate the metabolic processes.

13. The metal of assimilation because it alleviates intestinal disorders and stimulates metabolism.

14. The remedy of choice in many renal and spasmodic or cramping disorders.

Specific diseases Copper is used for include:

Copper’s use for other common health malodies may include chilliness, dizziness, nausea, night fever, and poor pulse. Glandular functions improve, and copper promotes capillary action and formation of the red corpuscles.

Copper is most frequently used to alleviate throat problems including coughing, hoarseness, laryngeal catarrh, and difficulty in swallowing. Copper also eases a fear of death, poor memory, and an inability to retain thoughts.

Numerous studies have drawn attention to the relationship between copper deficiency and heart disease, which effect has now been traced to both a deficiency in copper and an imbalance in the copper- to-zinc ratio in the body.

In 1939, the German physician, Werner Hangarter, noticed that Finnish copper miners were unaffected by arthritis as long as they worked in the mining industry. This observation led Finnish medical researchers plus the Germans, Hangarter and Lübke, to successfully use a mixture of copper chloride and sodium salicylate to treat patients suffering from rheumatic fever, rheumatoid arthritis, neck and back problems, and sciatica.

Copper aspirinate has been shown not only to be more effective in the treatment of rheumatoid arthritis than aspirin alone, but it has been shown to prevent or even cure the ulceration of the stomach often associated with aspirin therapy. More than 140 copper complexes of non-steroidal anti-inflammatory agents (aspirin and ibuprofen, for example) have been shown to be more active than their parent compounds.

The 1973 work by Dr. L.M. Klevay at the U.S. Department of Agriculture, Human Nutrition Research Center pointed to a relationship between copper and cholesterol. In subsequent work, published in 1975, Dr. Klevay theorized that a metabolic imbalance between zinc and copper — with more emphasis on copper deficiency than zinc excess – is a major contributing factor in coronary heart disease.

Subsequent work by other investigators has shown that copper complexes also can have a valuable role in the minimization of damage to the aorta and heart muscle as oxygenated blood reperfuses into tissues following myocardial infarction. This action is based on the anti-inflammatory action of copper complexes.

It has been speculated that the reason that the heart attack rate in France is lower than in the rest of Europe is because of the significant consumption by the French of red wine, which has a higher copper content than white wine because it is prepared with the skin of the grape intact.

Copper’s role in the immune system has recently been supported by observations that individuals suffering from Menke’s disease (an inherited disease in which there is defective copper absorption and metabolism) generally die of immune system-related phenomena and other infections. Further, animals deficient in copper have been shown to have increased susceptibility to bacterial pathogens such as salmonella and listeria. This kind of evidence has led researchers to suggest that copper compounds not only can cure various conditions, but can aid in the prevention of disease.

Copper jewelry worn directly on skin has been used for a hundred years or more as a remedy for many ailments, including arthritis. Now, copper bracelets to ease joint and arthritis pain are ubiquitous in health food stores, and health magazines and catalogues.

With the understanding that copper deficiency can result in gray hair, skin wrinkles, crow’s feet, varicose veins and saggy skin, copper has recently been touted as a “Fountain of Youth” for its ability to improve the elastic fiber in skin, increase skin flexibility, and act as an anti-wrinkle treatment. It has even been said to be able to return gray hair back to its natural color.

Copper can be used to help stabilise and to balance the flow of blood within the body also helping to increase circulatory functions when necessary. It can be used to cleanse wounds and to fight bacterial infection. It has also been used in the treatment of arthritis, bursitis, and rheumatism, and to stimulate the metabolic processes. Specific diseases copper is used for include dysentery, dysmenorrhea, epilepsy, liver conditions, nephritis, thyroid disorders, typhoid, ulcers, varices, varicose veins, and spastic and atonic constipation. Steiner also noted that copper increases self- acceptance, and the emotions are balanced. The person in need of copper may be restless, excitable, apathetic, neurotic, or exhibit the early stages of psychosis. (L.F.C. Mees, M.D)., ‘Living Metals’ (London: Regency Press, 1974), p.19-27. (Wilhelm Pelikan), ‘The Secrets of Metals’ (Spring Valley, NY: Anthroposophical Press, 1984), pages: 04-118) The ancients used copper to treat cholera, dropsy, eczema, flu, gall bladder disorders, hernia, jaundice, neuralgia, heart palpitations, scarlet fever, schizophrenia, and to strengthen the sexual organs. Other problems for which it is used include chilliness, dizziness, nausea, night fever, and poor pulse. Glandular functions improve, and copper promotes capillary action and formation of the red corpuscles. It has also been used to alleviate throat problems including coughing, hoarseness, laryngeal catarrh, and difficulty in swallowing. Copper also eases a fear of death, poor memory, and an inability to retain thoughts.

In the Ebers papyrus from the eighteenth dynasty of ancient Egypt, it is suggested that pulverised copper be used for granulomatous inflammations, especially in the eyes. Hippocrates used copper for empyema, haemoptysis, and pneumonia. Paracelsus used it for treating hysteria, syphilis, and pulmonary imbalances. In India, copper earrings are worn to prevent sciatica.

Edgar Cayce said copper balances the emotions so that the spiritual nature and mental self are aligned. It is believed that Copper aids in the karmic background as one of the common elements in Lemuria for stabilising the general genetic patterns of the then developing physical body and the bone tissue of the early anatomical form. This was done so that there was not the overbearance of the gelatinous form, which was at times typical of the anatomy in those days, particularly in the early phases of childhood. (Max Heindel), ‘Occult Principles of Health and Healing’ (Oceanside, California, U.S.A. The Rosicrucian Fellowship, 1938), page. 15. (Max Heindel), ‘The Rosicrucian Cosmo-Conception’ (Oceanside, California. U.S.A. The Rosicrucian Fel¬lowship, 1977), pages. 275,and 346. It is well documented that in many different languages that copper is used for healing and in spiritual growth. Copper can be used in a wide range of inflammatory conditions such as arthritis, rheumatism, inflammations in the cerebral cortex, activities of the inner ear, and intestinal disorders.

Various dysfunctions associated with the diaphragm, such as poor breathing can be treated with copper because it strengthens the neurological functions. Greater flexibility within the bone tissue including the cartilages, ligaments, tendons, and sinus tissue result. Use copper in left-right brain disorders such as autism, dyslexia, epilepsy, neurological dis¬charge, physical co-ordination problems, and visual problems. And the pineal and pituitary glands are strengthened.

Copper also eases pernicious anaemia, the taking of colloidal copper helps antidote the affects of microwave radiation and increases copper assimilation. In the esoteric area of life this mineral is known to combat lethargy, passivity, restlessness, excitability, and non- acceptance of oneself. It can stimulate initiative, optimism, diplomacy, and independence. Copper is one of the baser metallic elements of high conductive properties; thus the body’s electrical properties are activated. Antioxidant and Blood Cleansing: this is what copper is all about. It will cause the veins to become temporarily enlarged with rich and healthy clean blood. This can be observed when colloidal copper is applied topically directly to the skin. The veins beneath quickly become gauged with rich oxygenated blood. Copper usage to prevent osteoporosis: Copper for Skin Care to stimulate the regrowth of Collagen: and help dismiss wrinkles and sagging skin by gently massaging a few drops directly on to the skin. once or twice a day. Colloidal Copper can also can be used to help ear and inner ear problems using topically as ear drops