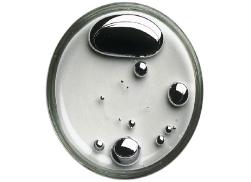 Mercury is liquid at room temperature
Mercury poisoning (also known as hydrargaria or mercurialism) is a disease caused by exposure to mercury or its compounds. Mercury (chemical symbol Hg) is a heavy metal which occurs in several forms, all of which can produce toxic effects in high enough doses. exists as inorganic salts, and its mercuric state Hg2+ may form either inorganic salts or organomercury compounds; the three groups vary in effects. Toxic effects include damage to the brain, kidney, and lungs.
Mercury is the 2nd most toxic substance on the planet with the 1st being radioactive uranium.
From the Thermometer to the Dinner Table

“Mad as a Hatter”

Few people who use the phrase today realize that there ’s a story of human suffering behind it; the term actually derives from an early industrial occupational disease. Felt hats were once very popular in North America and Europe; an example is the top hat. The best sorts were made from beaver fur, but cheaper ones used furs such as rabbit instead.

A complicated set of processes was needed to turn the fur into a finished hat. With the cheaper sorts of fur, an early step was to brush a solution of a mercury compound — usually mercurous nitrate — on to the fur to roughen the fibres and make them mat more easily, a process called carroting because it made the fur turn orange. Beaver fur had natural serrated edges that made this unnecessary, one reason why it was preferred, but the cost and scarcity of beaver meant that other furs had to be used.

Whatever the source of the fur, the fibres were then shaved off the skin and turned into felt; this was later immersed in a boiling acid solution to thicken and harden it. Finishing processes included steaming the hat to shape and ironing it. In all these steps, hatters working in poorly ventilated workshops would breathe in the mercury compounds and accumulate the metal in their bodies.

We now know that mercury is a cumulative poison that causes kidney and brain damage. Physical symptoms include trembling (known at the time as hatter’s shakes), loosening of teeth, loss of co-ordination, and slurred speech; mental ones include irritability, loss of memory depression, anxiety, and other personality changes. This was called mad hatter syndrome.

It’s been a very long time since mercury was used in making hats, and now all that remains is a relic phrase that links to a nasty period in manufacturing history. But mad hatter syndrome remains common as a description of the symptoms of mercury poisoning.

Key for terms in the below article: Neuron = is an electrically excitable cell that processes and transmits information by electrical and chemical signaling.

Neurofibrils = Any of the long, thin, microscopic fibrils that run through the body of a neuron and extend into the axon and dendrites, giving the neuron support and shape.

Tubulin = A globular protein that insulates the neurofibrils in contrast like the way rubber coating on a copper wire insulates it.

Neurofibril Tangles = an intracellular clump of neurofibrils made of insoluble protein in the brain of a patient with Alzheimer’s disease.

Mercury has long been known to be potent neuro toxic substance, whether it is inhaled or consumed in the diet as a food contaminate. Over the past 15 years medical research laboratories have established that dental amalgam tooth fillings are a major contributor to mercury body burden. In 1997 a team of research scientist demonstrated that mercury vapor inhalation by animals produced a molecular lesion in brain protein metabolism which was similar to a lesion seen in 80% of Alzheimer’s diseased brains. Recently completed experiments by scientist at the University of Calgary Faculty of Medicine now reveal with direct visual evidence from brain neuron tissue cultures how mercury ions actually alter the cell membrane structure of the developing neurons.

To better understand mercury’s affect on the brain start with this example of what brain neurons look like and how they grow: In this example a each brain neuron with a central cell body and numerous neurite processes. At the end of each neurite is a growth cone where structural proteins are assembled to form the cell membrane. Two principal proteins involved in growth cone function are Actin, which is responsible for the pulsating motion, and Tubulin a major structural component for the neurite membrane. During normal cell growth Tubulin molecules link together end to end to form micro-tubules which surround neurofibrils another structural protein component of the neuronal axon. Experiments showing a neurite of a live neuron isolated from snail brain tissue displaying linear growth do to growth cone activity.

*It is important to note that growth cones in all animals species ranging from snails to humans have identical structural and behavioral characteristics and use proteins of virtually identical composition. In this experiment neurons also isolated from snail brain tissue were grown in culture for several days. After which very low concentrations (30 µm, a microscopic amount) of mercury were added to the culture medium for 20 minutes. Over the next 30 minutes the neurite membrane underwent rapid degeneration leaving behind the denuded neurofibrils. In contrast other heavy metals added at this same concentration such as aluminum, lead, cadmium, manganese did not produce this effect.

To understand how mercury causes this degeneration let’s recall the previous example. As mentioned before Tubulin proteins linked together during normal cell growth to form the micro-tubules which support the neurite structure (neuro fiber of the brain). When mercury ions are introduced into the culture medium they infiltrate the cell and bind themselves to the newly synthesized Tubulin molecules. More specifically the mercury ions attach themselves to the binding site reserved for GTP on the beta subunit of the affected Tubulin molecules. Since bound GTP normally provides the energy which allows Tubulin molecules to attach to one another mercury ions bound to these sites prevent Tubulin proteins from linking together. Consequently the neurites’ micro tubules begin to disassemble into free Tubulin molecules leaving the neurite stripped of its supporting structure. Ultimately both the developing neurite and its’ growth cone collapse and some denuded neurofibrils form aggregates or tangles. Note that after mercury exposure the mercury has caused disintegration of Tubulin micro tubule structure. These new findings reveal important visual evidence as to how mercury causes neuro degeneration. More importantly this study provides the first direct evidence that low level mercury exposure is indeed a precipitating factor that can initiate this neuro degenerative process within the brain. NeuroReport 12(4): 733-737,2001. Consider a young child’s developing brain. Constant growth of brain neurons being degenerated. Heavy metal testing for mercury is widely available.